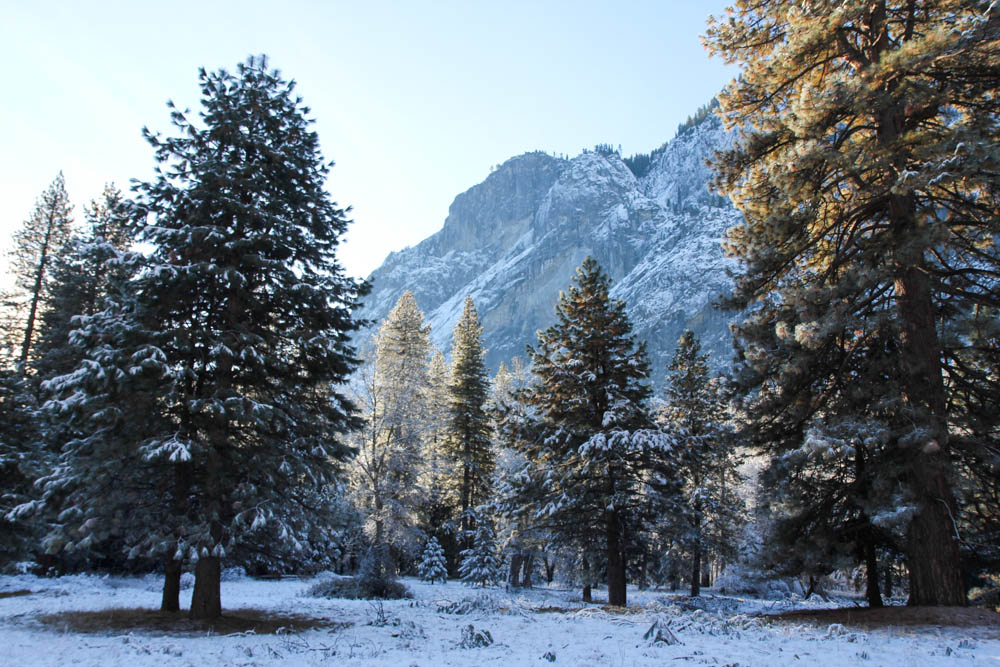 It’s summer here, today so warm that a pair of shorts was almost too much. Smoke swept into the mountains from some neighboring fire and my shoes filled with dust — emptied out once when I got to Sherwin Lake and again when I got home. Harper panted the whole way up the trail before walking straight into the lake. The windows are open all night now and I can hear the world announcing itself at all hours. In half-sleep, my mind creates the stories for the people outside. What ungodly hour is it? It’s ten, an hour after sleep, the middle of the night still light years away. I turn the fan on and remind my eyes to sleep again.

But today these photos brought winter back to me: the first soft warning sign of what was to come. Three days before I left Yosemite, this great wild nothing came out of nowhere, one delicate white morning that was gone within the hour. I had nothing to do but pack, so I walked through it, in it, among it, and it was mine, and it had been so long since I believed Yosemite was mine.

I left the park long before I really left. In my final months there, I moved inward and became unrooted. The loneliness had become unbearable. I want to claw at the way that happened — I want to know why and how and if I can stop that from happening in every place I live. I don’t know if it’s something that lines the very core of me or if it’s something I invited in myself, but it slowly unwound that valley home and made it unknowable.

In an interview in The Sun with Craig Childs, Leath Tonino says, “You’ve written that a proper measure of civilization should not be how well it stands but how well it falls,” and Childs says,

You can fall in chaos and destruction – mile-high flames and people screaming – or you can have a strong-enough infrastructure, a strong-enough culture, that you aren’t destroyed by the collapse. The process plays out over decades or centuries. It’s not sudden. There’s time to change course. Small changes can become big changes. I don’t believe in points of no return. You’re never going to return anyway. It’s always forward. The fall of civilization doesn’t have to be cataclysmic. It can actually be generative. It can be the birth of a new civilization. You can fall without even noticing you’re falling.

I am constantly amazed by how much I don’t miss it. Even finding these pictures and remembering the soft footsteps of the man on the bridge who came to me and said have you seen it from just up ahead? It’s really beautiful. I’m glad I was there, but there is no part of me that wants to be there now. I am deeply content these days, just barely on the other side of the mountains. The warm months are here, joyfully, ecstatically, and I promise not to give snow another thought until it announces itself here in the fall.